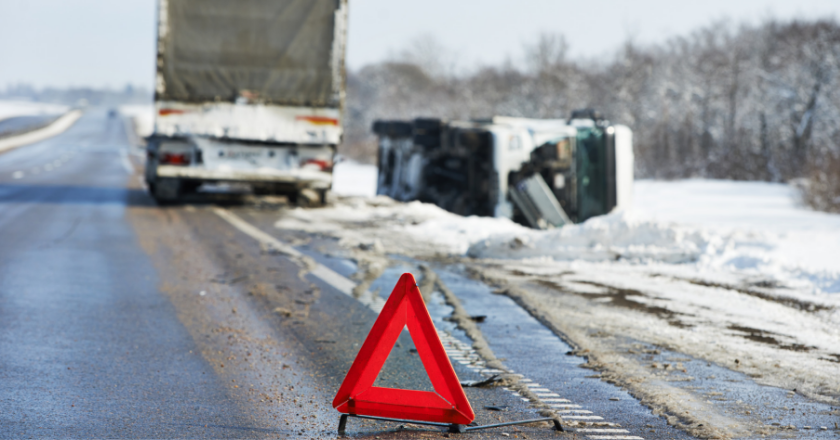 Collisions happen. A deer pops in front of your vehicle. A car drives down the road in the wrong direction. A drunken motorist veers into your lane. When these types of incidents happen, federally regulated carriers often are required to report them to the U.S. Department of Transportation. Reportable collisions go on the carrier’s record as part of its Compliance Safety and Accountability report (CSA), and for years there was little carriers could do about that—until recently.

Now, there is something you can do. Thanks to a program called the Crash Preventability Demonstration Program, a carrier can request the Federal Motor Carrier Safety Administration (FMCSA) review a collision if the carrier felt the event was unavoidable. Lytx has been active in advocating for this demonstration program and in particular for the ability to submit video evidence to the FMCSA to establish the collision was unavoidable.

Crashes designated Not Preventable in the Determination Program will not be used when calculating the carrier’s Crash Indicator Behavior Analysis and Safety Improvement Category (BASIC) measure and percentile, which FMCSA uses to prioritize carriers for safety intervention.

These Not Preventable crashes will be shown separately in the Safety Measurement System. An example of what that might look like is shown below, with the blue portion of each bar indicates the number of crashes that a carrier has received that were found to be Not Preventable. 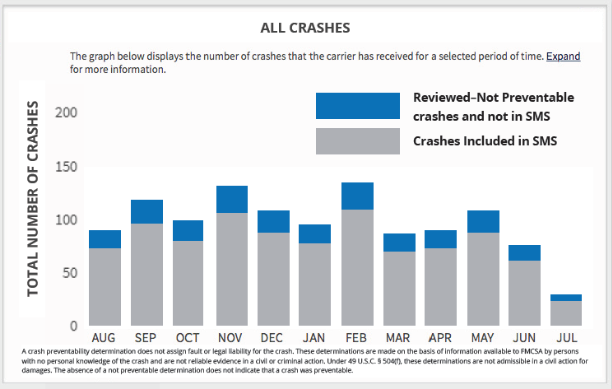 This additional data gives the public – and regulators – a potentially more accurate snapshot of the carrier’s safety record, one that can now take into account the fact that some collisions are not the carrier’s fault.

What types of collisions qualify for an FMCSA Crash Preventability Program review?

The FMCSA set out ten conditions for collisions that can qualify for a review under the Crash Preventability Determination Program (CPDP). They include when the commercial vehicle:

In addition, the collision must have occurred on or after August 1, 2019.

If you believe a collision in your fleet meets one or more of the ten conditions, you should consider asking the FMCSA to review the event under the Crash Preventability Determination Program.

How to submit a request for data review

It’s easy to submit a request with the FMCSA to review a collision. You just need to gather materials beforehand that will help support your case. That includes video footage, photos, police accident reports, drugs and alcohol test results, insurance claim information, hearing transcripts, or affidavits. Video footage, in particular, can be particularly powerful as evidence for exoneration. Most of these items often already gathered during the aftermath of a collision.

Then head over to the FMCSA’s portal, DataQs, to submit a crash preventability request for data review (RDR). Click the “Add a Request” button, and submit your request under “Crash Could Not Be Prevented.” The 4-step process is outlined in this graphic: 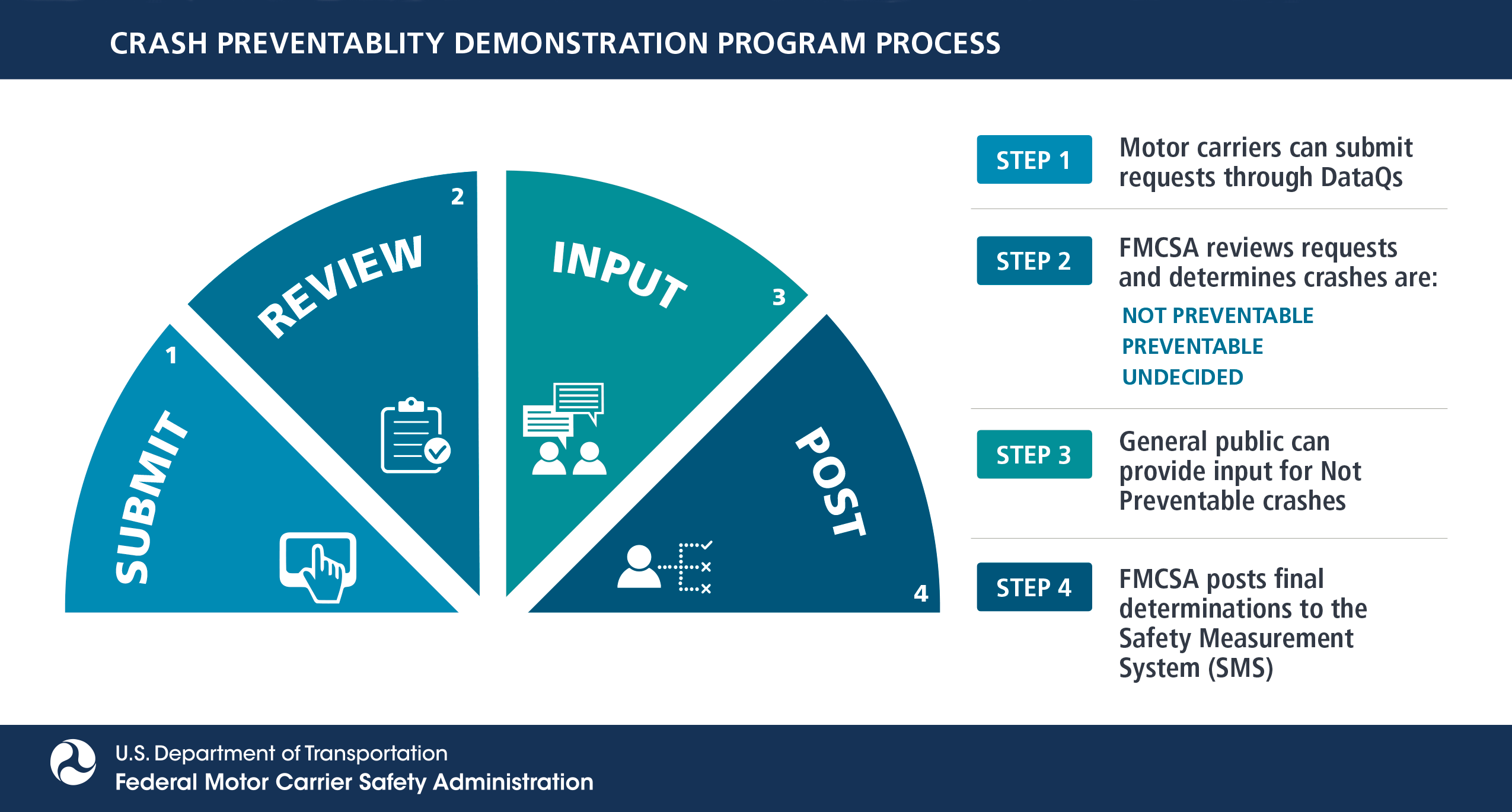 Most frequent types of unavoidable collisions

This program had been in development since 2017 as a demonstration program before it was adopted as a program this year. In June 2018, the FMCSA released some interesting ​quarterly data about the most frequent types of unavoidable collisions experienced by commercial vehicles. The agency reported receiving 5,228 requests for review under the program and issuing 2,790 determinations during the period ended June 29, 2018. The vast majority of the 2,790 collisions reviewed by the agency were deemed not preventable, which was good news for carriers. 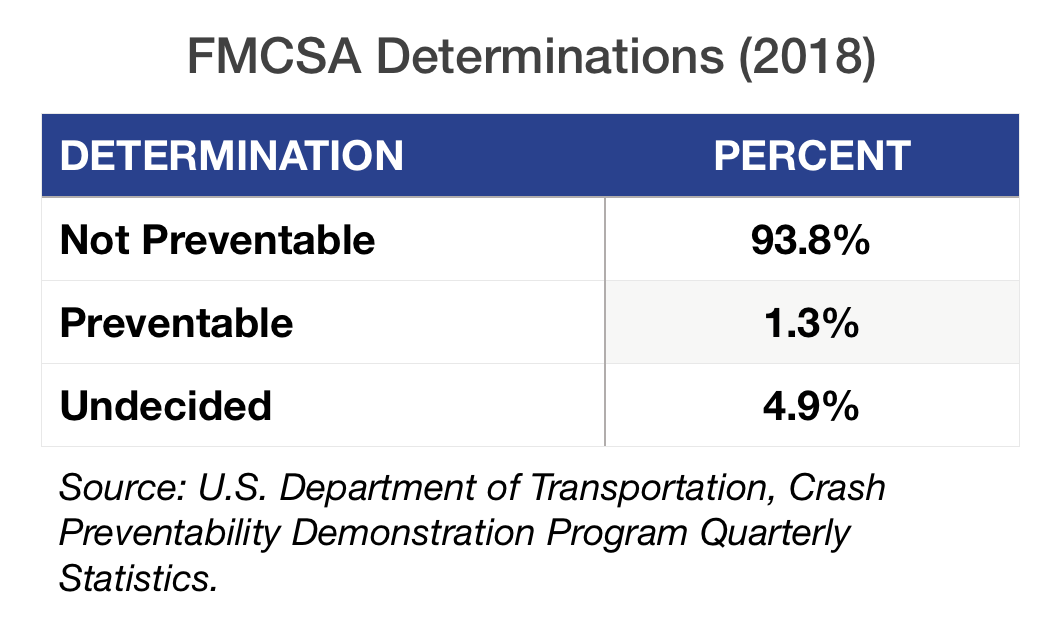 The most frequent collision type reviewed by far was commercial vehicles that were hit from behind (69.5%). The next three most frequent were: struck while legally stopped or parked (7.8%), struck by a motorist driving under the influence (7.7%), and struck by a vehicle traveling in the wrong direction (6.8%).

So while collisions do happen, regulators are beginning to take into account the possibility that, in some cases, there may have been little carriers and their drivers could have done to prevent them. And that’s good news for carriers that have fleet safety technology such as Lytx in place to both gather the necessary video evidence and proactively manage risk.