Waste Connections has taken the latter approach, and it’s helped make the company safer. The third-largest waste disposal company in North America was founded on the principle of servant leadership, where its leaders feel “privileged” to lead the team. Those roots have helped reduce risk and solidify the safety culture at Waste Connections as it operates in the country’s fifth most fatal industry.

The term “servant leadership” was coined by Robert K. Greenleaf in his 1970 essay titled “The Servant as Leader.” In it, he describes how a servant-leader serves others first.

The concept has strengthened Waste Connections’ business model over the last 20 years. But can servant leadership really help make an organization safer?

Shawn Mandel, Waste Connections’ vice president of safety and risk, says so. Here, he shows how servant leadership, together with the company’s core operating values, has led to a safer bottom line for the organization. What’s more, the Waste Connections model offers lessons for fleets of all kinds—even yours.

“Servant leadership is about creating an environment where we set our people up for success,” Mandel said at the 2018 Lytx User Group Conference. “We as leaders are here to support and make good things happen for those that we’re privileged to lead. That’s what servant leadership is all about for us.” 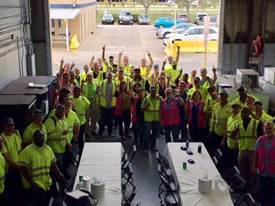 From 2013 to 2015, the waste industry experienced 212 fatalities. Yet Waste Connections didn’t have a single fatality.

How does that happen? It goes back to servant leadership and the company’s operating values.

“A lot of people think servant leadership is soft leadership,” Mandel said. “That’s not it at all. It’s about setting expectations, communicating those expectations, and establishing the mindset, the skill set and the tool set for our teams so they’re well equipped to perform at a high level.”

The Lytx Driver Safety Program has been a key asset in the company’s tool set, helping its drivers reach new heights.

In 2006, the percentage of Waste Connections employees involved in safety incidents stood at 40 percent. The company doesn’t distinguish its incidents by severity, so, an “incident” can range from running over a sprinkler head to a collision.

In 2008, Waste Connections implemented the Driver Safety Program, seeking to reduce its incident rate. Shortly thereafter, the rate dropped from 40 percent to 32 percent. In the 10 years since then, the company’s incident rate has continued to fall. It currently stands at about 13 percent annually.

“Event recording technology has been tremendous. It’s been a game changer,” Mandel said.

Coaching Has Been Instrumental to Safety

The consistent decline in Waste Connections’ incident rate over the last 10 years says as much about the company’s coaching effectiveness as anything. Its coaching effectiveness score, calculated by how many times a coached behavior is repeated in a 60-day period, stands at 94 percent. It’s an exceptional rate considering the Lytx standard is 60 percent and reaching 100 percent is rare.

But it’s not enough simply to capture events through the Driver Safety Program, Mandel said. “You’ve got to coach. Event recording technology is an awesome tool, but if you’re not using it properly—if you’re just capturing events and not coaching those events—it can just create liability for you.”

Waste Connections learned that well when they merged with Progressive Waste Solutions in June of 2016, growing from a $2 billion business to a $4 billion business overnight. While Progressive Waste Solutions already had a video telematics program in place, they weren’t seeing the same positive results that Waste Connections had seen from safety technology.

Since the two waste disposal companies merged nearly two years ago, the former Progressive Waste Solutions has excelled on the coaching front, leading to a major drop in its incident rate. In 2015, shortly before the merger, PWS was averaging 4,000 incidents a year. By April of 2017, with a focus on coaching firmly in place, they were averaging about 150 incidents per month, making for 1,800 incidents annually.

“The last couple of years has been a transformative period for that side of the house,” Mandel said. “We’ve been really excited about the progress.”

The company’s operating values inspire every decision Waste Connections’ employees make, whether it’s salespeople going out to sell a new account or a driver getting behind the wheel of a truck. And while technology certainly has helped reduce Waste Connections’ risk, the mindset of employees has been just as crucial in achieving that goal.

For example, Mandel recounted the story of a driver in Las Cruces, N.M. who brought the first operating value to life in the field. Last month, out of the corner of his eye, the driver spotted what he thought was an animal dart beneath his truck.

He set his brake and revved his engine, trying to startle the animal out from below. The animal didn’t budge. So, the driver got out and looked—something the waste disposal company has encouraged in safety meetings as a best practice in backing. They refer to it as the “Backing GOAL”—when in doubt, get out and look. By getting out and looking, the driver discovered what he had seen wasn’t an animal at all—it was a 3-year-old girl, hiding beneath his truck.

“The driver realized the girl’s father was nearby, playing hide-and-seek with her,” Mandel said. “Had our driver not taken ownership of our safety practices, the end result could have been much different. So yes, we strive to empower our employees to make the right decision at times like that.”

For more best practices that can inspire a strong safety mindset on your team, read our ebook Seven Best Practices for Your Fleet Safety Program.