Miles are reduced 16% from March to April, Collisions are down 28% year-over-year 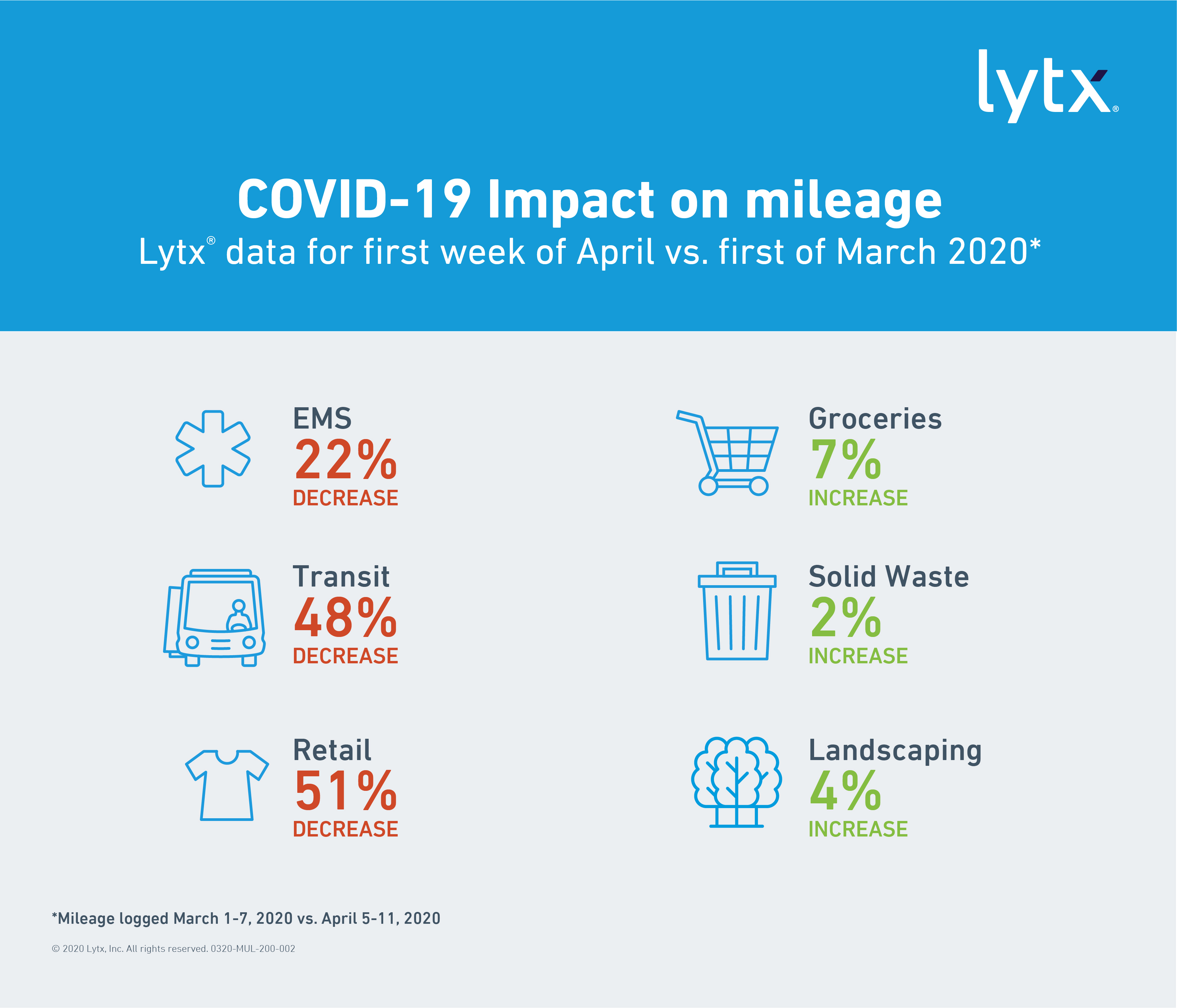 COVID-19 has transformed the transportation economy in dramatic ways. Through analysis of Lytx data, we uncover how the pandemic has affected various industry segments in very different ways, creating a surge in demand for some and abrupt slowdowns in others. Retail distribution and transit have been hardest hit, while grocery distribution and emergency medical services in some areas of the country have accelerated. Overall, fleets have logged 16 percent fewer miles during the first week of April compared to the first week of March. And with less congested roads, driving risk profiles have also shifted. Although collisions are down, “hurry up” behaviors spurred by the current sense of urgency are rising. Here are 10 ways that the pandemic and the corresponding shutdown have changed transportation in recent weeks.

1. Emergency Medical Services (EMS) has picked up in some parts of the country, but has slowed down in others.

Overall, EMS experienced a 22 percent drop in total miles driven during the first week of April compared to the first week of March this year, according to Lytx driving data. Larry Luh, Assistant Chief of Operations of the Emergency Medical Services Division at Manatee County EMS in Florida, reported that call volumes in March declined roughly 50 percent as residents avoid emergency rooms and seek alternatives.

In normal times, “we routinely get calls from people who can’t get to their doctors and they call us for a ride,” Luh said. “They’re not doing that anymore.”

The decrease in activity didn’t apply across the board, with some areas such as New York experiencing record call volumes, even as emergency medical technicians fall ill from infections.

Takeaway: For EMS fleets that are seeing a slowdown, take advantage of the downtime to encourage technicians to catch up on remote training. Supervisors can also use the time to re-evaluate health and safety policies to meet current needs.

With shelter-at-home orders reducing ridership, transit services from Denver to Detroit have been forced to cut service, making the sector one of the hardest hit by the pandemic. In addition, school buses across the nation are sitting idle as schools have transitioned to distance learning.

Takeaway: Students eventually will return to schools, and ridership will start to climb as restrictions ease in the coming months. Take advantage of the downtime to plan ahead, visualize what services should look like when they resume, and develop the policies and training programs to support your vision.

3. Trucking and distribution is a mixed picture, with grocery up and non-food retail down.

“We saw a 35 percent increase in miles” during the third week in March, said Lee Robledo, Vice President of Safety Compliance, Regulatory and Investigations at NFI Industries, a third-party logistics provider that operates more than 3,000 tractors and 12,500 trailers across the country. Since then, mileage has levelled off as food shoppers begin to scale back their purchases.

However, non-food retail distribution has dropped 51 percent in the first week of April versus the first week of March as many retailers shutter stores and ports see fewer shipments from Europe and Asia during the global lockdown.

Takeaway: Some diversified trucking and distribution fleets such as NFI have temporarily shifted their resources from slow business units (non-essential retail) to areas experiencing rapid growth (grocery and medical).

4. Solid waste and other services such as landscaping soldier on.

Services provided outdoors, such as waste collection and landscaping, have continued unabated, with both sectors posted 2 percent and 4 percent uptick in mileage respectively during the first week of April compared with the first week in March.

“These two sectors in particular have been a bright spot,” said Jonathan Hayft, a data analyst with Lytx. “They continue to provide services during this time, ensuring that the trash is collected and recycled, and landscape is maintained.”

Takeaway: Because these two sectors have operated at nearly full capacity during the pandemic, they are likely to be good sources of information on best practices for maintaining worker health and safety for a full workforce.

One of the silver linings to come out of the shelter-at-home mandates that have swept the country is the decongestion of roadways, which has led to a significant reduction in collisions involving commercial vehicles. During the first three weeks of March 2020, collisions have declined 28 percent compared to the same period in 2019, according to Kyle Warlick, a Lytx client intelligence analyst.

Takeaway: The drop in collisions should lead to lower auto claims costs for the year.

6. Within March 2020, driving behaviors improved in both frequency and severity of risk.

Another factor contributing to fewer collisions may be the decline in risky driving behaviors within the month of March this year. As road congestion eased throughout the month, behaviors involving other vehicles such as following too closely and late response have improved. From week of March 1, before most states had initiated shelter-in-place requests, to March 29th, when shelter-in-place had been instituted in most the populous areas for at least two weeks, Lytx data showed a 51% improvement in frequency and a 55% improvement in the severity of risky driving incidents across all Lytx-connected fleets.

Takeaway: “As lockdown orders became more pervasive, there was a sharp decrease in risky behaviors involving other vehicles within the month of March,” Warlick said.

7. However, driving risks associated with “hurry up” behaviors were up on a year-over-year basis.

Although collisions are down due to fewer vehicles on the roads, Warlick cautioned that there are still reasons to remain cautious and vigilant in promoting safe driving practices. For instance, during March 2020 compared to March 2019, there has been an uptick in what Warlick referred to as “hurry up” behaviors, including incomplete stops, loose objects in the cargo area, and speeding. This is reflected in news stories about a jump in the number of speeding tickets issued from New York to California in recent weeks.

“With an increase in demand for essential supplies and groceries, and new buying habits from consumers, it makes sense that we would see an uptick in these behaviors that are indicative of an increased sense of urgency,” Warlick said.

Takeaway: Encourage drivers to take moments during their busy days to breathe, relax, and stay calm. While their work is vital, it’s also important that they return home safely at the end of each day.

8. On the flip side, deliveries are encountering fewer traffic-related delays.

According to data from Lytx-connected fleets, there has been a 19% Increase in speed on frequently traveled roads and 10% decrease in travel time across frequently traveled routes, in March 2020 compared to March 2019. On-time deliveries are up across the nation, Robledo of NFI Industries told Lytx in an interview. And drivers like Chris Lytwyn of TransWood are making their runs in record time across some of the nation’s densest areas.

“The traffic has been cut in half, if not more,” Lytwyn said in an interview with Lytx. “I can go through most of Chicago at posted speeds with no issue. It’s usually a nightmare to get in there 90% of the time. Now, it’s great.”

Takeaway: With wide open roadways, it’s tempting to go fast (see No. 7). Remind drivers that aside from the monetary cost of traffic tickets, there’s also the cost to their personal safety.

9. Drivers are eating and drinking more in their vehicles.

With most sit-down dining options eliminated across the country, drivers are getting more of their meals to go or via drive-thru options. As a result, there’s been a substantial uptick in the instances of eating and drinking while driving.

Takeaway: Some companies allow drinking water or other fluids to promote hydration, but ask that drivers pull over to eat. Whatever your policy for eating and drinking while driving, make sure your drivers know what they are.

As humans shelter indoors, more animals are venturing into roads, creating potential hazards for drivers. From coyotes roaming the streets of San Francisco and moose wandering into front yards to wild goats in other populated areas.

“With more people staying indoors over the past few weeks to help contain the spread of COVID-19, biologists have noted wildlife are changing their habits and venturing out of their usual spaces,” said Warlick. “Unfortunately, this may mean an increase in animals on the road.”

Takeaway: Drivers need to be extra vigilant to animal activity to avoid strikes, Warlick advised. Those typically occur at night by a large margin and peak between 3:00 am and 7:00 am. “We also see strikes more often around highways and freeways, where the speed makes it more difficult to react,” he said.

By sharing these insights gleaned from the company’s driving data, Warlick said Lytx hopes to shed light on how the pandemic is altering the picture of risk on roadways, while also helping to provide insight for how commercial drivers can remain alert to new risks and adjust to remain safe.

“Because of what we do, we’ve always had a deep appreciation for the importance of professional drivers,” Warlick said. “We know these fleets and drivers are going above and beyond to keep our shelves stocked and to deliver our vital medical supplies. This data also gives us insight into the immense pressure they’re operating under to keep our nation running.”