Ever had a near miss? We all have. The vehicle ahead in the right lane loses control and swerves right to hit a guardrail. If it had swerved left, it could have easily collided with us.

Instead of breathing a sigh of relief and moving on, safety professionals increasingly see near misses, or near collisions, as high-value, yet low-cost, learning opportunities. As a result, we’re seeing concerted efforts by fleets to report, collect data, and investigate near misses and near collisions.

Near collision and near miss analysis are considered to be an essential tool for effective risk management. Here's what you need to know:

What is a near miss?

The Occupational Safety and Health Administration defines near misses as "incidents in which no property was damaged and no personal injury was sustained, but where, given a slight shift in time or position, damage or injury easily could have occurred."

Depending on the circumstance, near misses also can be called "near accidents," “near hits,” "accident precursors," "close calls," "injury-free events," and "near collisions."

Near miss examples on the road:

That brings us to the second topic: near collisions.

What’s the difference between near misses and near collisions?

A near collision is similar to a near miss except that it involves moving objects. This is the major differentiation between the two and is the primary difference in how and when they are reported.

Why focus on near misses or near collisions?

A near miss, by definition, means no collision occurred. So why report or focus on it?

Because even if a near miss event did not cause injury or damage, it had the potential to do so. Near misses are only near misses due to a fortunate interruption in the chain of events that could have otherwise gone terribly wrong.

History has shown repeatedly that most loss-producing events, both serious and catastrophic, were preceded by warnings or near miss incidents.

How many times have we heard about major collisions in the news that were preceded in earlier weeks and months by a series of near misses, lucky breaks, or close calls? It’s no coincidence. “History has shown repeatedly that most loss producing events (incidents), both serious and catastrophic, were preceded by warnings or near miss incidents,” according to the National Safety Council.

Fortunately, there are ways organizations can evolve their processes and systems to take advantage of near collisions to help prevent actual collisions.

Effective reporting and analysis of near misses and near collisions

The National Safety Council offers the following best practices for near miss reporting:

How to manage near collision and near miss reporting and investigation

Increasingly, fleets are investing in tools that allow them to proactively manage risk through better investigations and analyses of near collisions. These include video telematics tools that can provide visibility into what happened during an event and, importantly, why.

With telematics, you can also collect data that give you clues beyond a single incident and provide insight into trends that can allow you to make improvements that benefit your entire fleet. An example would be finding a particular intersection where, during certain times of the day, an unusual number of near collisions occurred for multiple drivers. In that instance, simply rerouting around that intersection could yield a significant overall reduction in risk.

A good place to begin your investigation is with a date range, said Steve Ball, Senior Training Consultant at Lytx. Look for the total number of near collisions and see if they cluster around certain groups of drivers or vehicles. Evaluate to see which behaviors contributed most to near collisions, so that you can address those behaviors through coaching and safety messages and campaigns.

The chart below shows some of the top behaviors that contributed to near collisions, based on an analysis of fleets that utilize Lytx Driver Safety Program. 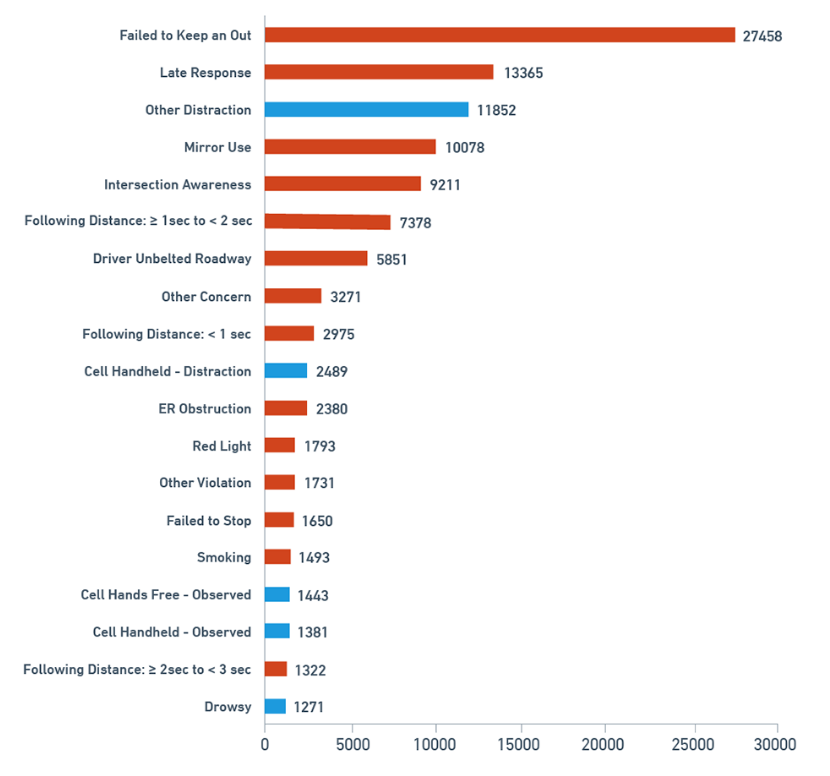 Based upon a select sampling of Lytx client’s data.

At the end of the day, efficient near miss reporting and analysis can be vital to preventing serious, fatal, or expensive accidents and keeping your workplace safe.

Want to speak with someone about how Lytx's fleet management solutions can help you prevent near-misses and near-collisions in your fleet? Get a free, customized demo.