What is an accelerometer?

If the word “accelerometer” sounds familiar to you, it might be because you most likely carry a mobile phone that contains one. But what is an accelerometer?

An accelerometer is a sensor that can detect motion to help a device, such as your phone, determine when you’re working out, how many steps you’ve taken, and whether you’re holding it in landscape or portrait mode, among other things. Accelerometers are used in many consumer applications. The hard drive in your laptop probably has an accelerometer to detect freefall when it has been dropped so that it can safely park the read/write heads before it hits the floor. Accelerometers are also heavily used in government, industrial, commercial, and transport applications, including GPS fleet tracking and shipping.

At Lytx, we've been leveraging accelerometer data for over 20 years, to help businesses gain insights about their vehicles and drivers, so we understand the ins and outs of the technology. Here’s an overview of the basics:

What does an accelerometer do?

Accelerometers measure acceleration, which in practical terms means changes in speed or direction. This can include bumps and vibrations, sharp increases or decreases in velocity such as hard vehicle acceleration or braking, forces that might indicate taking a turn too fast, or strong impacts.

How does an accelerometer work?

An accelerometer can also sense the orientation of a device, phone, or vehicle. By detecting changes in the direction in which the weight of the mass falls, multi-axis accelerometers keep track of the direction gravity is pulling, which of course tells which way is down.

What does an accelerometer measure?

By detecting voltages that result from deflections in the elements that hold the known mass, an accelerometer measures the position and travel of a device or asset. With an onboard accelerometer, you can measure impact, vibration, or sudden changes in velocity that might indicate risky operation, damage, or other potential problems. This data can be especially useful when combined with information from other sensors such as GPS.

How is accelerometer technology used in fleets?

Businesses leverage fleet management technology to help understand where vehicles are, get insights into safety, and more. In fleet vehicle applications such as telematics, information from GPS and an accelerometer can be combined with video feeds and data from the engine computer to provide additional context and insight into a driver’s performance on the road. An accelerometer is just one of many sensors video telematics systems use to capture critical vehicle data. These systems might include multi-axis accelerometers for speed, acceleration, and deceleration, gyroscopes to detect rotation and orientation, and GPS to detect location.

In the event that a collision or near collision occurs, accelerometer data can reveal how fast a driver was going or if a driver was moving when they should be stopped, to provide more context into what happened before the incident. This information can provide much-needed evidence and all involved parties save money by determining fault more quickly.

When nothing is going wrong, accelerometer data is still important as part of a bigger picture that can help drivers identify their strong skills and their areas for improvement, helping enhance safety on an ongoing basis. Accelerometer data can be used in conjunction with machine vision and artificial intelligence (MV+AI) to detect risky behavior that the driver might not even be aware of.

Take Lytx’s “rolling stop trigger” for example. If a driver rolls through a stop sign, the camera lens uses machine vision to detect that there was a stop sign ahead, and the accelerometer informs the AI that the driver never stopped. The MV+AI technology can then flag this moment as a risky event. Having this level of insight into what is happening on the road helps drivers learn more about their own habits and learn how to refine their skills. 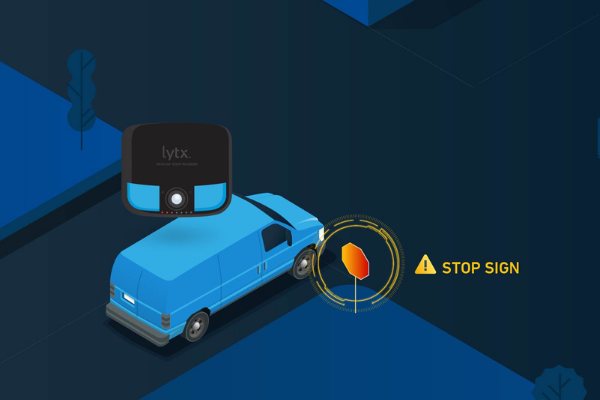 Even the best drivers can benefit from the added information an accelerometer provides. For example, accelerometer data combined with MV+AI can determine that a seemingly risky behavior was actually an evasive maneuver, or can help alert a fleet manager that a driver needs assistance.

An accelerometer is an important part of a full video telematics system for fleet applications, which use the accelerometer data to trigger video capture of incidents and events that occur on the road.

MV+AI provides additional context, augmenting accelerometer data, and working to detect and identify risky behaviors before an incident occurs. Video capture gives fleet managers the power to see what is going on in fleet vehicles in real time or review events later. With Lytx video telematics systems, you can access comprehensive real-time information about your fleet and drivers over high-speed wireless or cellular networks.

To learn more about how Lytx can provide insight into your fleet, schedule a demo.