As you sit down this week for Thanksgiving, just think: how did that gorgeous, golden Thanksgiving turkey find its way to your table?

Like the 45 million other turkeys estimated to be consumed this Thanksgiving, your bird’s journey from farm to table required a massive effort between growers, drivers, and grocers — all working in concert for months in advance of the holiday to make things happen behind the scenes.

It’s always a game of Tetris, with so many moving parts, to make sure millions of families get their turkeys, said Beth Breeding, the National Turkey Federation’s vice president of communications and marketing.

If your turkey was fresh (not frozen), it was likely laid four to six months ago. After 28 days of incubation, the bird hatched and spent 10 to 18 weeks on a farm before it was sent to a processing plant. Once a turkey is slaughtered, it has a 21-day shelf life, according to Aberdeen, a market intelligence company. That’s when the clock starts ticking and the race is on to shuttle the birds to grocery stores in time for them to be stocked and sold within days of the Thanksgiving holiday.

Foster Farms turkey season kicks off with a safety rodeo

At Foster Farms, the fresh turkey season starts in early October, when the company kicks off the season with a rodeo — a safety rodeo, that is. Each year, Foster Farms’ drivers gather for the event in Turlock, Calif., where the company operates a plant capable of processing up to 200,000 turkeys a day.

“We want to make sure that everyone has a chance to get a safety refresher before they head out for the busy season,” said Jose Ortega, corporate vehicle safety manager at Foster Farms. “We go through best practices for what to do in adverse weather, for making sure their vehicles have the correct tires, and for fundamental safety and operating procedures, including how their Lytx video telematics systems are there to back them up. Our No. 1 goal is to make sure everyone makes it home safely at the end of the day, so they can spend Thanksgiving with their friends and families.”

If your turkey was frozen, as nine out of 10 turkeys are, there’s still a major drive to ferry the birds from warehouses, where they can be stored for up to three years after they’re frozen, to grocery stores.

The rush doesn’t stop with Thanksgiving. There’s also the end-of-the-year holidays as well, culminating with New Year’s. Within a six-week span starting at this time of year, Foster Farms’ turkey division does about one-third of its business, Ortega said.

The journey from farm to table

Of the 242 million turkeys raised in the United States in 2017, nearly 20 percent were consumed during Thanksgiving, according to the National Turkey Federation. This year, that will translate to roughly 45 million turkeys, each weighing an average of about 15 pounds. That adds up to roughly 675 million pounds of turkey that has to be transported to stores for the holiday. According to RGL Logistics, the typical big rig can haul up to 50,000 pounds, which equates to 13,500 truck deliveries required to deliver this year’s Thanksgiving turkeys.

This doesn’t take into account all the fixings and desserts, which would require an estimated 65,550 big rigs to deliver, according to some other fun calculations by RGL Logistics. 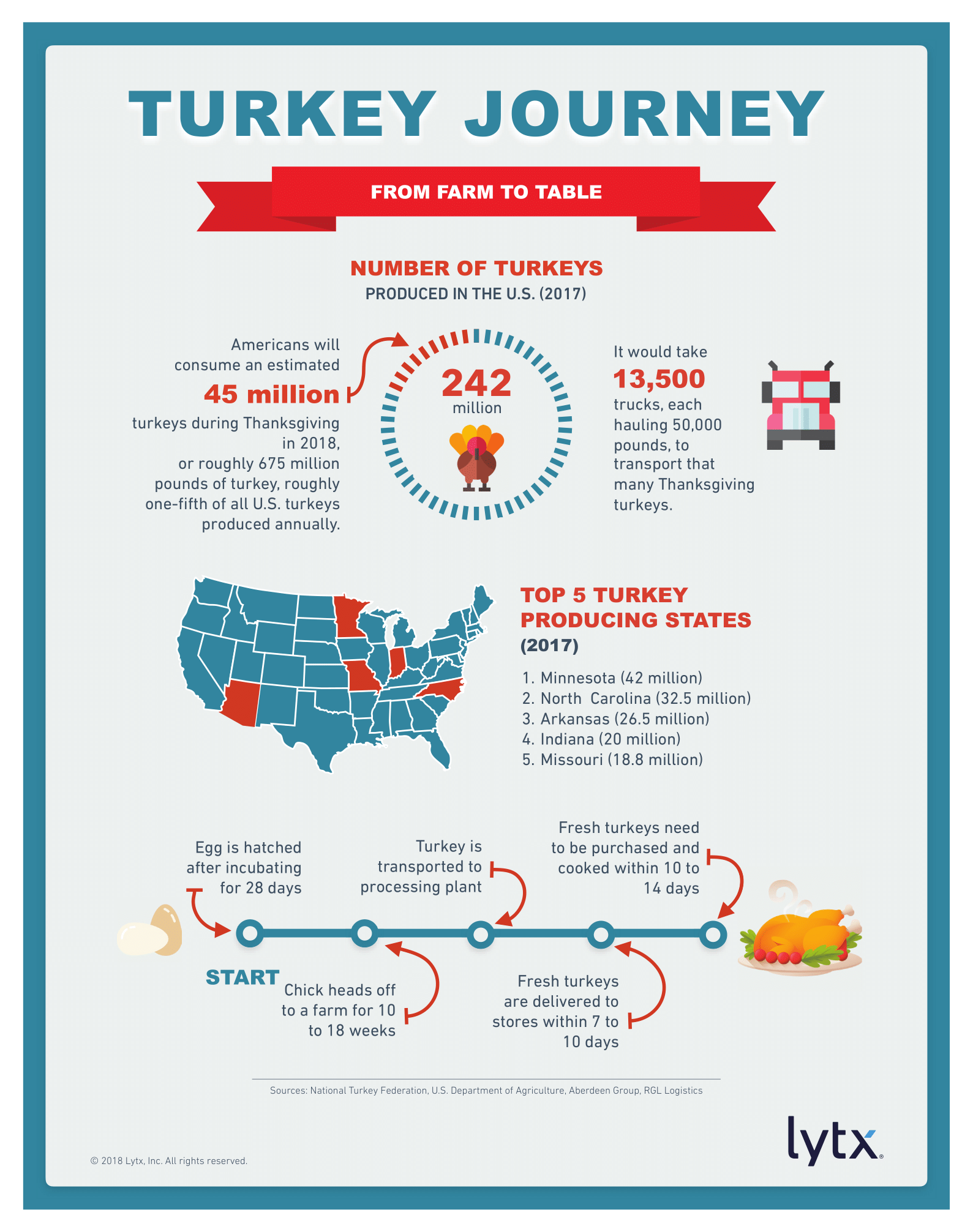 As you chew on those numbers, here’s something else to think about.

Unlike the turkey on your table, there are two lucky birds each year that experience a different journey (and a far better) fate — the National Thanksgiving Turkeys.

These turkeys get to take a road trip to Washington, D.C. several days before the big day. Once there, they get to nest at a hotel before they are “pardoned” by the U.S. President and sent to a farm to live out their days. This year, the National Thanksgiving Turkeys hail from South Dakota. And they’ll be lounging in style during their stay at the famous Willard InterContinental Hotel, which has hosted Abraham Lincoln, Ulysses S. Grant, Martin Luther King, Jr., Woodrow Wilson, and numerous other historical luminaries over the years.

“We love Thanksgiving because it’s just a great tradition for our country and a reminder of the contributions agriculture makes to America, from the food on our table to the clothes on our backs,” Breeding said. “It’s a great time for us to reflect on these things that we are grateful for, as well as all the people who help make it possible.”