Based in Johns Creek, Ga., Saia’s director of safety, Karla Staver, maintains a national incentive program geared toward injury prevention. Among the program’s many components: 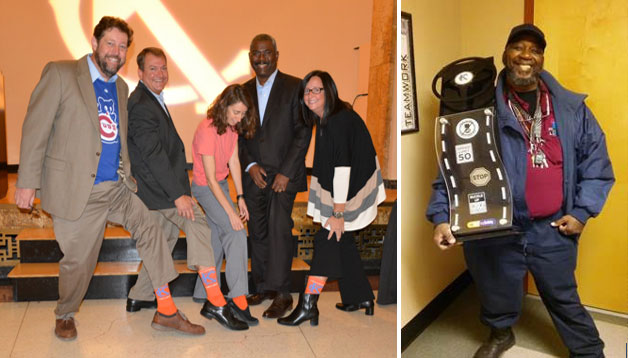 City of Kansas City employees show off their orange safety socks at an annual breakfast recognizing the city’s safest drivers and coaches (left). A Kansas City bus driver with the “traveling trophy,” awarded quarterly to the department showing the most improvement. Source: City of Kansas City, Missouri.

The cornerstone of Pepsi’s rewards program is the challenge coin. Modeled after the challenge coins used in the military, Pepsi awards the coins to drivers who demonstrate the best safety records, based on Lytx data. Each trimester, each of the company’s 16 distribution centers receive a batch of coins. The coins are given out to roughly 10 percent of the workers, making them relatively scarce and, therefore, more valuable. Employees can cash the coins in for swag, such as headphones or apparel.