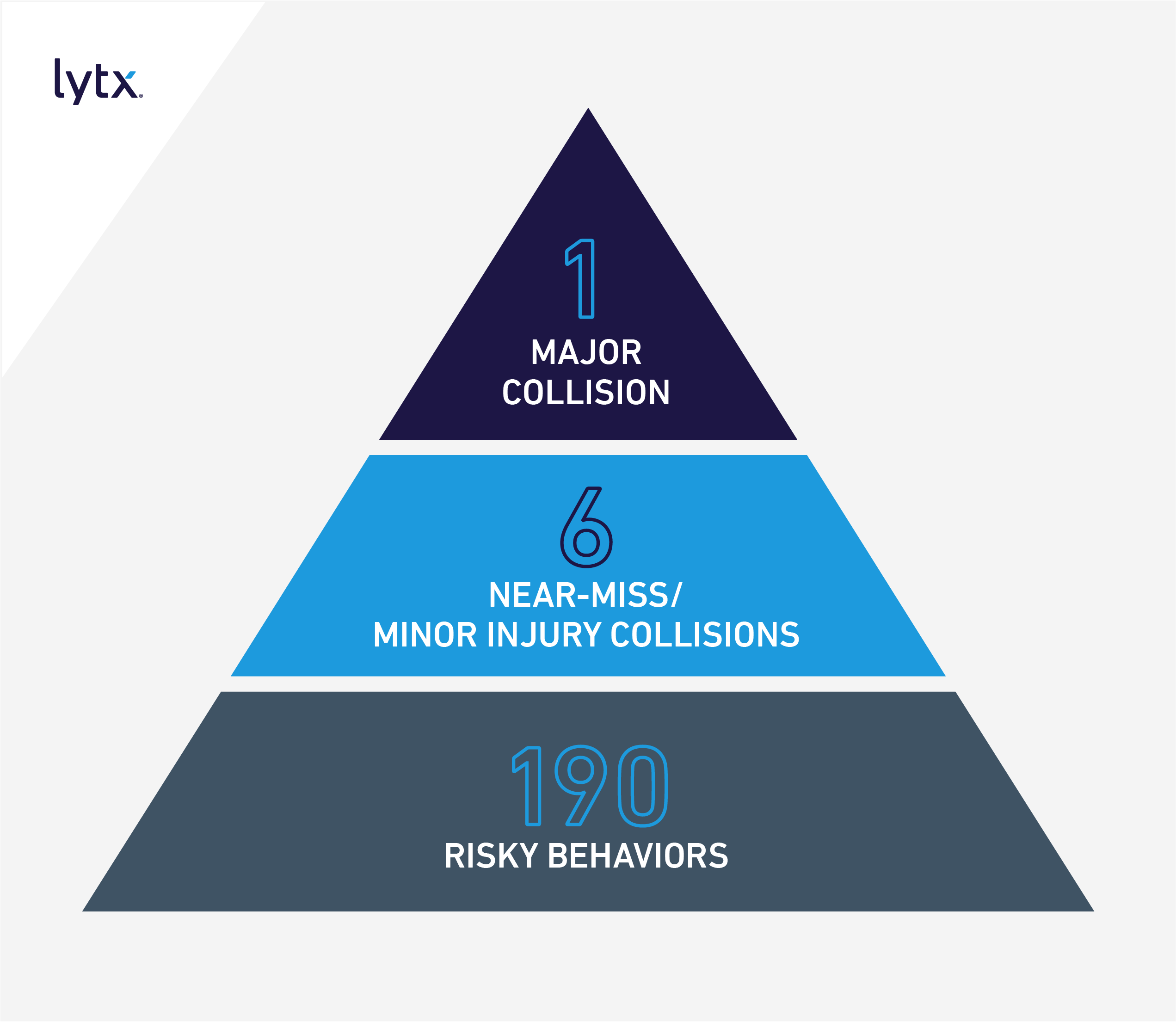 Anyone who’s worked in risk management or who’s responsible for OSHA compliance knows about Heinrich’s Pyramid. The theory is that for every 300 acts of risky behavior, there are 29 acts that lead to a minor incident or scary near-miss, and one act that leads to a serious injury or fatality.

Lytx® data analysts indicate that for driving, the above numbers draw a narrower path to a serious incident. In fact, a combination of risky behaviors can propel a driver from the bottom of the pyramid to the top in the blink of an eye.

Lytx data professionals, who oversee Lytx analytics on more than 100 billion miles of driving data, say that in driving, the pyramid takes on a much more alarming proportion. Simply put, 190 acts of risky behavior can lead to six collisions resulting in minor injury or property damage, and one fatal collision.

"Companies who have experienced even one serious injury or fatal collision know the damage it can do to their business, their reputation and their drivers’ state of mind," one Lytx data analyst said.

Taking a closer look at the Lytx data from DriveCam®-captured events reveals that about 50 of those 190 acts of risky behavior are drivers not wearing seatbelts or being distracted by hands-free/handheld cellphone use or food or drink in the cab.

"These may seem like minor policy infractions, but let me paint a picture about why they quickly add up to collisions," the analyst said. "These are not one-off behaviors. They likely happen every day, and a driver will quickly find him or herself in that 190 layer of the pyramid. But add just one additional behavior and you significantly compound the risk of having some sort of collision, moving the driver upward in the pyramid."

With driving behaviors, the fast lane to serious collisions lies in this combination of behaviors–preventable behaviors.

"A driver may have a habit of using a cell phone but is still allowing adequate following distance," the analyst said. "It just takes one time of following too closely, combined with the habitual use of the cell phone, to lead to a serious collision."

Lytx data reveals the riskiest combination of behaviors as:

Preventing a collision starts with coaching drivers on unsafe habits that can increase a fleet’s overall risk, and not dismissing them as minor behaviors.

Said the Lytx data analyst: "The Lytx driver risk pyramid shows that every minor behavior starts a path toward a potential unsafe incident—and eliminating those behaviors can go a long way toward reducing overall risk."